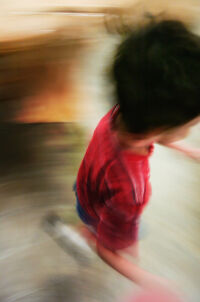 Like most seven-year-olds, Danny Kramer’s always on the go. What sets him apart is where he goes; as a child who has autism, he often retreats into a world of his own, singing to himself and moving ceaselessly.

Petco’s pet carriers proved irresistible, and Danny climbed inside while waiting for check-out. This is not his primary means of transit.

Danny is “uncontrollable,” in the words of his mother; yet the lack of understanding from other adults is more challenging than his misbehavior. Mrs. Kramer has printed cards that describe autism - “A Spanking Won’t Help,” to paraphrase - and distributes them when Danny’s willfulness attracts negative attention.

 The Kramers love a good game of hide-and-seek. Danny Kramer is exiting, frame left; his mother, Andrea, is chasing him as his ten- year-old sister, Jesse, plays with her laptop. (She was drawn into the game several minutes later.) Danny often asks his father, Carlos (not pictured), to help him hide. His parents aren't entirely convinced that he understands the premise, as he tends to choose the same place each time, but Danny loves playing regardless.

To a parent, autism is heartbreaking. Children with autism seem to develop normally until around three years of age, at which point they visibly backtrack in development—regressing linguistically and behaviorally. This progress is hard regained, putting autistic children years behind their peers.

Yet they are still children; they delight in their private games and devices, and in exploring their parents' boundaries; they dance the light fantastic with gleeful abandon, as in Danny's creative use of a playground swing.

Young Mr. Kramer enacts a city in his living room, by means of Megablox and playing cards. He knows his city innately. Andrea Kramer once switched two blocks while Danny was at school; Danny immediately spotted and fixed the errant block. The city’s design and order is so important to Danny that his mother is able to use this as a disciplinary measure—“Don’t make me put away the blocks!” 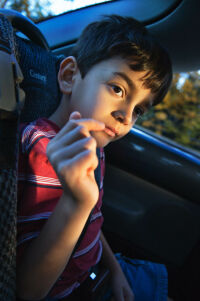 Danny is “painting the beautiful trees” passing by.

Mark has autism. He is largely non-verbal; although he understands language, he rarely speaks more than a few words at a time.

Here, Mark waits for a horse at Piscataway, as his younger brother Daniel and mother Marie converse. It was his mother’s first time riding, and Mark surrendered his long-time horse to her, so that she would be sure to have a good one.

Marie Sherrett proudly displays her family's awards, including at least one bowling trophy won by Mark. Mark bowls most Saturday mornings with a Maryland Parks and Planning bowling team, organized for adults with developmental disabilities. He scored 130 points, which significantly outpaces this photographer’s bowling ability. Two games only—more would be practice, and practice “doesn’t count.”

Mark works at a company that makes uniforms.

He is remarkably open-minded about exceptions to his daily routine, as long as an environment of constancy is available. Here, the Sherretts are attending a cousin's open house; the hubbub overwhelmed Mark, and he sensibly sought relief by locating a couch downstairs.

Similarly, Mark often travels with his mother; the shock to his routine is negated by using a Jacuzzi and pool at each host hotel.

  Mark delights in horse-themed décor, as evidenced by his shower curtain.

Mark's affection for horses is more than superficial appreciation. Horseback riding is widely cited as a therapy for those with autism; indeed, Mark is to be an example of its effectiveness in a soon-to-be-published book.

But when he’s on horseback, all of the indignities and minor outrages of a life lived slightly out of mesh with the rest of humanity melt away, and for an hour, he’s John Wayne, riding off into the sunset—no less proficient than anyone else, no less happy, and as intent and noble as one can be.

“Autistic”: a short word, often misheard as “artistic.” It’s a complicated word, one that refers to a developmental disorder, but also one that irrevocably brands its referents.

For most of us, it’s a word that inspires fear and remorse. Autism is an unknown.

Inside the Spectrum is a photo essay that shows the realities of living with autism.

It was exhibited at the Corcoran Gallery of Art’s 2006 BFA Photojournalism senior thesis show and at the World of Possibilities Disability Expo as a series of large, box-framed archival prints, and distributed as small-run self-published books of two formats.

Autism is feared and misunderstood. I felt that its joys and struggles should be honestly depicted.

When Andrea Kramer was first told that her son, Danny, had autism, “I asked them if he would ever be able to have children, and they said ‘No.’” Yet Danny shows every sign of living a perfectly fulfilling life; he goes to public school, and talks, and reads, and plays, and has a whole lot in common with most seven-year-olds.

Clinically, autism is characterized by emotional distance, a fascination with manipulating objects, revelry in routine, and a tendency to “zone out” into an unseen world. Autism is often accompanied by delays in language development; many autistic children don’t speak.

Yet this gamut of symptoms is not clearly defined. Within a person with autism, each is present to varying degrees. Due to its breadth of symptoms and degrees, the many varieties of autism are commonly referred to as “autism spectrum disorders.”

Up to 0.6% of all American children have an autism spectrum disorder, according to the Centers for Disease Control; yet autism is still an enigma to most.

I hope to change this by showing autism by reference, through Mark Sherrett and Danny Kramer; and by showing the ways in which they have learned to live in a skeptical and unaccommodating world.

I photographed this essay. It was my senior thesis for the photojournalism program at the Corcoran College of Art + Design. I worked with local autism advocacy groups to find interesting—and interested—families. My classmates were generous with their time in helping me edit 8,900 photographs down to 11.

The images are treated with overdriven, saturated tones to convey how the world can feel to those on the spectrum: a world of sensations that are a little too loud, a little too bright, a little too fast.

Photojournalist
As a photojournalist, I work with sources to document their lives in understandable and surprising ways.

InDesign
This layout tool allows you to make printable files for lengthy publications, such as books or magazine articles.